On 9 April 2019 the Salaries & Allowances Tribunal gave councillors the right to award local government Chief Executive Officers an additional 1% in total salary package.  That’s not worth much to the average Joe, but it will add thousands to Arthur Kyron, the CEO of Canning’s benefits.  I personally don’t think he’s earned the right to expect more than he’s been awarded since commencing at Canning in 2016 and here’s why.

A fortune has been spent promoting Canning as Perth’s “Southern CBD” (launches, corporate videos, sponsored content in publications) but it’s little more than spin if the lack of state funding and federal government commitments to date is anything to go by.

Table of Canning wish lists versus state and federal grants and promises below.

Is CEO Kyron, himself, the problem and if so what are the ramifications for the residents of Canning?

As early as one year in to his contract, in 2017, Kyron was asked by elected members, at a council meeting, if he had been lobbying politicians in the lead-up to the state election.  The answer, basically, was “no”.  The CEO stated it wasn’t that easy  – but the councillor that seemed most agitated at Kyron’s seeming inaction to secure commitments for Canning’s future at that time was Ben Kunze, a long-time electoral office staffer of the state’s formerly most senior minister, Member for Riverton Mike Nahan. If anyone would know about the value of lobbying…

This time around, as we head to a federal election, I asked Kyron the dreaded question:

[There are concerns you have] not arranged to meet with the Prime Minister, or Federal Opposition Leader, or Federal Ministers and their Opposition Shadows across portfolios that may be relevant to City of Canning’s plans both now and in to the future, and ….this….extends to the three Federal Members, and their opponents, whose areas of responsibility include Canning, ie, the seats of Hasluck, Tangney and Swan.

[Can you] please detail what formal meetings… have occurred in the last six months with same… and if no meetings took place, why?

Kyron did not react reasonably, in my view.  He seemed to compile little more than a list of pollies, or their reps, whom he’d had contact with since he’d arrived at Canning.  Some of them had changed portfolios since, or could be connected only to a specific time, place or project.  None of them seem to have provided or promised anything of high strategic value to Canning, bar the Bentley 360 project (which seems to be moving away from original aspirations for the area – more soon).

When pressed on what lobbying he had initiated in the lead-up to the election Kyron became dismissive:

Given we are talking about the much-investigated City of Canning, Kyron reminded me “[his aim was] to raise the positive profile of the City, following the demise of the previous council and the distraction during the period of local government reform”.

Boy, that one never gets old….  Canning has a tendency to fall back on such refrains when explaining why something may not have improved after millions of dollars in inquiries in to the City.

So what has Canning received from the state and federal governments, versus what was hoped for? 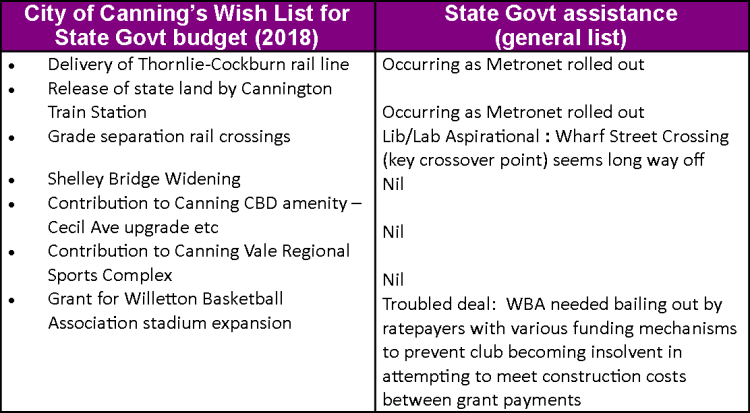 Conclusion:  City of Canning isn’t going anywhere fast, and certainly not if, as Kyron asserts, we aim to function as “Perth’s Southern CBD”.

Kyron may have gotten lucky though, see below (Marion Boswell, Labor candidate for Tangney)

So if we aren’t getting funding for our major aspirations, where is the money coming from to upgrade Cecil Avenue, our CBD’s main stretch-come-boulevarde, which it is hoped to run a light rail/trackless tram down, offer two town squares adjacent to, etc?  Well, the City boasts it is funding the $76m worth of works required over 10 years itself – and that means the residents of Canning are, without any alleviation of this cost from either the state or federal government.

Arthur Kyron may have gotten lucky, though – despite his seeming reluctance to deliver on Key Performance Indicators such as shaking down pollies for money when the gettin’s good.  Marion Boswell, Labor’s candidate for the Federal seat of Tangney, called on him instead and brought a gift – Shadow Federal Minister for Regional Services,  Territories and Local Government, Stephen Jones.  He was apparently very impressed with the City’s plan for the future (begun under the previous council), stayed “much longer than planned” and is looking to provide future Federal support.

So what does Arthur Kyron get paid?  Is he worth it, based on what is and isn’t happening within the City of Canning, and should he be granted thousands more in benefits when his next salary and performance review comes up (due before half the councillors and the Mayor are potentially replaced in local government elections in October)?