If the McGowan Govt wants reasons to legislate the dismissal of poorly performing individual local govt reps, it need look no further than the City of Canning.

Within an entirely newly elected council already compromised by vested interests (20mths on from investigations and suspension), there is one councillor that stands out more, ironically, for doing bugger all: Cr Ayse Martli.

Seemingly incredibly lazy and entirely unaccountable to her residents, Martli has just returned from living interstate for months.

Martli didn’t attend the council meet where her leave request was considered*, and, though believed to have been back in WA since early May, failed to show for the first applicable meeting thereafter.

Overall, Martli was missing in action for something like five months (and it gets worse):

Martli not only expected to be paid councillor sitting fees whilst away, she was spotted advertising herself for overseas employment before she’d even requested leave of absence (and it gets worse):- 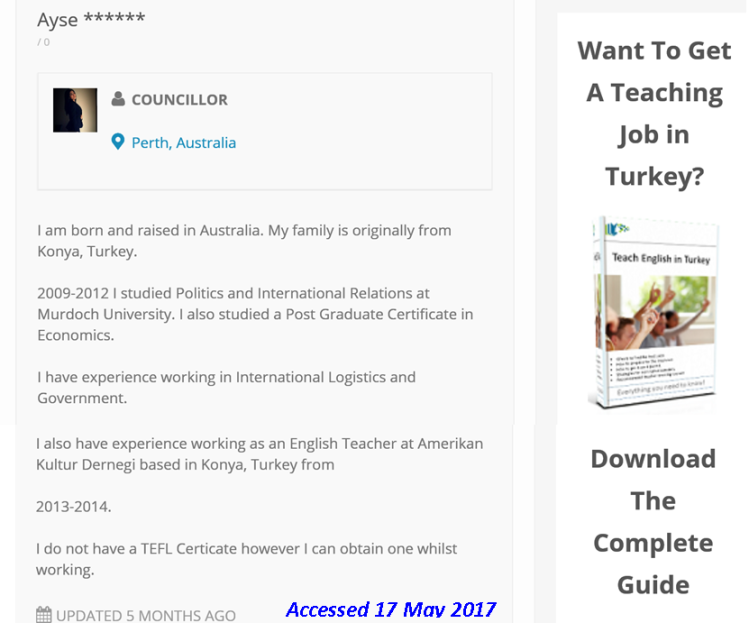 Time for the extensive dot pointing of how unaccountable and poorly performing this “councillor” appears to be:-

Compounding this is the fact Martli’s ward covers the Bentley Regeneration project, a near billion dollar bonanza for Canning that she should be 100% across as a young woman, not long out of uni, who needs to be a part of ensuring new housing is truly affordable, life enhancing and earth sustaining.

But she doesn’t seem to give a rats’ ass.

Several times over the last few months I’ve tried to contact Martli about perceptions of her performance.  The CEO and Mayor were cc’d in to this and didn’t intervene.  Martli may think the Mayor has her back, but WAKE UP TOOTS!  He didn’t agree you should be allowed to buzz off to the eastern states on fat sitting fees, and he kicked your ass for not even bothering to turn up for the aged care facilities tour, prior to voting on how Canning caters for its most vulnerable.

Astoundingly, Martli plans to run for council again in October…. How does that even work?

It’s an unpleasant thing to address, but this isn’t about standing one’s ground against adversity – it’s about terrible performance and not addressing terrible performance. It’s about keeping other people out of the role of councillor and on top of it all, accepting nearly 30K a year to do it.

Whether Martli is in WA or on the Moon, she seems little more than dead weight now and if she serves two terms she will earn towards a quarter million.

Time to bring the issue to the Minister.